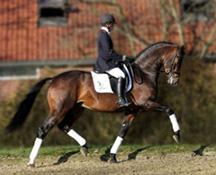 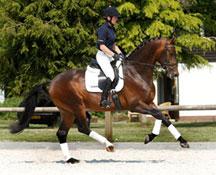 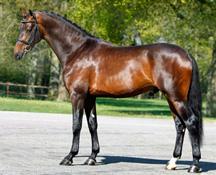 Ampere is a world class champion stallion. This eye-catching stallion steals the show whenever he steps into the spotlight.

It all started when he left the arena as the most expensive foal at the Borculo Foal Auction. In February 2008 at the stallion show Den Bosch, he made the hearts of many spectators beat faster and became the convincing champion of the stallion show. After that, the breathtaking bay stallion became the undoubtable winner of the 70 day performance test in Ermelo. Dream scores mark his extraordinary qualities: walk 8, trot 9, canter 9.5, suppleness 9, self carriage & balance 8.5, and ridability, work ethics, and talent for dressage 9. Test riders described the stallion as the best stallion in years. The exemplary stallion presents himself extremely highbred with overwhelming and striking charm, beautiful neck and breathtaking body.

Over and over again he convinces jury members and spectators with his brilliant type combined with three fantastic basic gaits. With his modern riding horse type, Ampere has justified the title, Top Stud.

Ampere is the third stallion show champion in a row of the sire, Rousseau. Rousseau himself was silver medallist at the World Championship for young horses in 2003. Ampere’s damsire, Flemmingh, is the sire of many Grand Prix horses like Krack C ridden by Anky van Grunsven, and Lingh ridden by Edward Gal. Ampere’s dam, Larivola, has the predicate “keur”.

Many successful dressage and jumping horses like the approved stallions Mythos (s. Mythens xx) and Gringo (s. Ramiro) descend out of the dam line. Jan Brink (Sweden) is training Ampere. Ampere does not produce chestnut offspring.