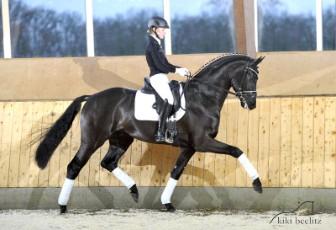 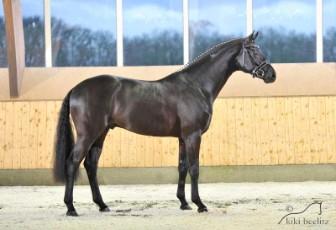 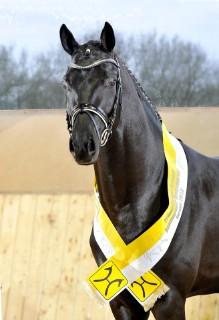 This allure along with his brilliant mechanic stem from the best Dressage genes. Even at an early age his sire Fürstenball was able to set milestones. He himself was champion stallion at his licensing, stallion performance Test winner and Bundeschampion (German young dressage horse champion) as a five year old. In the following year 2012 he confirmed his quality with consistent high placings at regional and national levels as well as at the World Championships for six year olds. In addition was the great success of his offspring (champion stallion and highest priced at the Oldenburg licensing 2012, champion foal at the German foal championship in Lienen) which continued to shine throught the season.

The dam 'Wie Princess' from the Trakhener family Schwindlerin bought st Moritz Junior to the world as her very first foal (premium stallion, second highest in his performance test, qualified for the Bundeschampionat as a four year old stallion) then came his full sister Samoa, also a beautiful black state premium mare (at grading average 8,5) and then this stunning jet black colt caught sight of the world. From this family tree 30 licensed stallions, numerous elite mares and countless premium foals can already be accounted for. Also to mention is that through Servus in the fourth generation old tried and tested Hannoveranian blood is present.

'So Ladies and Gentlemen, what could be better?' words of praise from our licensing commitee. This question we can't answer just yet but what we can say is how priviledged and honoured we feel to be able to offer a stallion of this calibre. And just to put the icing on the cake Finest has no red factor which means all of his influence will be to dark colouring. (No chestnuts).

Rejoiced premium stallion at the hannover licensing, a celebration of the superlative packed with extra special emotions!

Every day brings delight and discovery with our 'Crowds Darling' and every appearance is greeted with euphoric applause and joyous faces. This picture perfect wonder never fails to enchant and impress with his luminous presence. The combination of his superb correct rythmical paces, impeccable confirmation and willing nature can only pave the way to greatness. His flawless temperament and exceptional natural ability have earned him the label (literally translated) 'a gift from Nature' and it seems nothing can stand in the way of this extraordinary creature.