With the prize giving ceremony in which Sezuan and Dorothee Schneider were crowned World Champions in the 7-year old division, the first edition of the World Championships for Young Dressage Horses in Ermelo, The Netherlands, had a magnificent ending on Sunday afternoon 31 Juy 2016.

He was already a two-fold world champion and the Danish Warmblood-stallion again proved to be invincible in the first World Championships for for seven-year-old horses. The Zack x Don Schufro offspring, bred by Linette Jaeger, made history in Ermelo. Dorothee Schneider rode the black pearl owned by  Gestuet Peterhof to the winning score of 89.005%: a hat-trick for the black stallion which received a 10 for perspective from the judges. 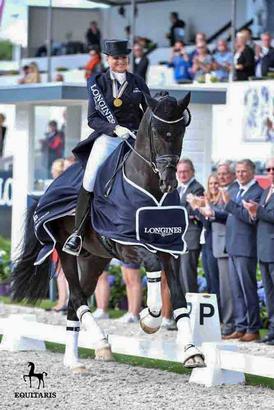